Announcing a new documentary detailing the life of devil worshiper and
drug addict Aleister Crowley, a man called the “Wickedest Man In The World” and “A Man We’d Like To
Hang” by the British press. Also includes some information about his followers from the forthcoming book, “Children of the Beast: the Disciples of Aleister Crowley.”

Ok, so I woke up on the 13th thinking about theprediction of the UFO show; but, I run a UFO blog – how many other people woke up with similar thoughts? I can certainly say that it was aminimal number as this particular predictionseemingly had even less media attention than Blossom Goodchild’s prediction of nearly the same date (Oct 14th was her prediction in 2008 - and BTW it would have been 10-14 in parts of the world). But, that said, perhaps many in NYC (it being a major city as theprediction said) did wake up with similar thoughts (this will be important in my speculations). IF even 1/10th of 1% of the metro area did have similar thoughts before hand (let’s be conservative and just call the metro area 10 million) – that would be 10,000 folks….

The media played it as they always do – `UFO’s are Entertaining’! I’m not even certain more than two channels even `bothered’ with the story. Even with a supposed unexplained airport shutdown on the same day. Frankly, coverage that reeks of compliance to keep such events of low concern to the population. So, what did happen in the sky?  …Read the full article

A report by Jeremy Scahill in The Nation (Blackwater’s Black Ops, 9/15/2010) revealed that the largest mercenary army in the world, Blackwater (now called Xe Services) clandestine intelligence services was sold to the multinational Monsanto. Blackwater was renamed in 2009 after becoming famous in the world with numerous reports of abuses in Iraq, including massacres of civilians. It remains the largest private contractor of the U.S. Department of State “security services,” that practices state terrorism by giving the government the opportunity to deny it. 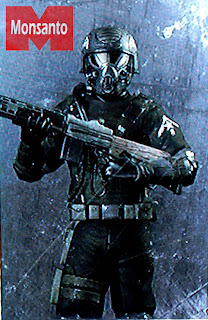 Many military and former CIA officers work for Blackwater or related companies created to divert attention from their bad reputation and make more profit selling their nefarious services-ranging from information and intelligence to infiltration, political lobbying and paramilitary training – for other governments, banks and multinational corporations. According to Scahill, business with multinationals, like Monsanto, Chevron, and financial giants such as Barclays and Deutsche Bank, are channeled through two companies owned by Erik Prince, owner of Blackwater: Total Intelligence Solutions and Terrorism Research Center. These officers and directors share Blackwater.

One of them, Cofer Black, known for his brutality as one of the directors of the CIA, was the one who made contact with Monsanto in 2008 as director of Total Intelligence, entering into the contract with the company to spy on and infiltrate organizations of animal rights activists, anti-GM and other dirty activities of the biotech giant.

Contacted by Scahill, the Monsanto executive Kevin Wilson declined to comment, but later confirmed to The Nation that they had hired Total Intelligence in 2008 and 2009, according to Monsanto only tokeep track of “public disclosure” of its opponents. He also said that Total Intelligence was a “totally separate entity from Blackwater.”

However, Scahill has copies of emails from Cofer Black after the meeting with Wilson for Monsanto, where he explains to other former CIA agents, using their Blackwater e-mails, that the discussion with Wilson was that Total Intelligence had become “Monsanto’s intelligence arm,” spying on activists and other actions, including “our people to legally integrate these groups.” Total Intelligence Monsanto paid $ 127,000 in 2008 and $ 105,000 in 2009.

No wonder that a company engaged in the “science of death” as Monsanto, which has been dedicated from the outset to produce toxic poisons spilling from Agent Orange to PCBs (polychlorinated biphenyls), pesticides, hormones and genetically modified seeds, is associated with another company of thugs.

Almost simultaneously with the publication of this article in The Nation, the Via Campesina reported the purchase of 500,000 shares of Monsanto, for more than $23 million by the Bill and Melinda Gates Foundation, which with this action completed the outing of the mask of “philanthropy.” Another association that is not surprising.

It is a marriage between the two most brutal monopolies in the history of industrialism: Bill Gates controls more than 90 percent of the market share of proprietary computing and Monsanto about 90 percent of the global transgenic seed market and most global commercial seed. There does not exist in any other industrial sector monopolies so vast, whose very existence is a negation of the vaunted principle of “market competition” of capitalism. Both Gates and Monsanto are very aggressive in defending their ill-gotten monopolies.

Although Bill Gates might try to say that the Foundation is not linked to his business, all it proves is the opposite: most of their donations end up favoring the commercial investments of the tycoon, not really “donating” anything, but instead of paying taxes to the state coffers, he invests his profits in where it is favorable to him economically, including propaganda from their supposed good intentions. On the contrary, their “donations” finance projects as destructive as geoengineering or replacement of natural community medicines for high-tech patented medicines in the poorest areas of the world. What a coincidence, former Secretary of Health Julio Frenk and Ernesto Zedillo are advisers of the Foundation.

Like Monsanto, Gates is also engaged in trying to destroy rural farming worldwide, mainly through the “Alliance for a Green Revolution in Africa” (AGRA). It works as a Trojan horse to deprive poor African farmers of their traditional seeds, replacing them with the seeds of their companies first, finally by genetically modified (GM). To this end, the Foundation hired Robert Horsch in 2006, the director of Monsanto. Now Gates, airing major profits, went straight to the source.

Blackwater, Monsanto and Gates are three sides of the same figure: the war machine on the planet and most people who inhabit it, are peasants, indigenous communities, people who want to share information and knowledge or any other who does not want to be in the aegis of profit and the destructiveness of capitalism.

* The author is a researcher at ETC Group. Translated from the Spanish version by Lisa Karpova, Pravda.Ru.


The NYPD and the FAA fielded numerous phone calls Wednesday afternoon from freaked out New Yorkers who say they saw UFOs hovering over Manhattan, the New York Post reported. Callers said they saw strange silver objects bobbing or hovering in the sky. “Some people saw something described as yellow with blue lights surrounding it,” FAA spokesman Jim Peters told the Post. “Every once in a while you get phone calls from people who see something they can’t explain.” Police said they got a few calls but weren’t investigating. ‘UFO’ Sightings Over Manhattan / MY FOX New York 2010.10.13